Mantids in the USA

Every fall, the BugLady gets emails from people who are excited about finding their first Praying mantis, and who can blame them? The large and charismatic Praying mantis is a rock star of the insect world. What follows is a massively rewritten version of a BOTW from 2007. 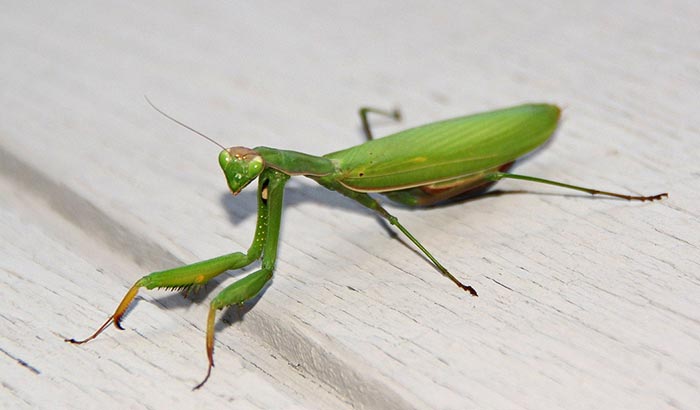 A few summers ago, the BugLady got a phone call from a woman whose daughter was doing a project on Praying mantises. She had phoned an “expert,” who told her that the PM is an invasive insect. So, this BOTW starts with an aside:

Aside: There are a number of words that people use interchangeably to describe the status of certain plants and animals—alien, exotic, non-native, introduced, and invasive. The first four mean (more-or-less) the same thing—that, whether accidentally or intentionally introduced, whether from another continent or another part of this continent, an organism is not from around here. Apple trees, earthworms (here in God’s Country), Swamp darners, alfalfa, Asian ladybugs, chicory, honeybees, Helleborine orchids, rusty crayfish, Norway maples—not native to southeastern Wisconsin. “Invasive” means that, native or not, an organism’s population grows large enough to have a negative impact on the community it occurs in. Praying mantises in Wisconsin are introduced, etc., but they are not invasive. 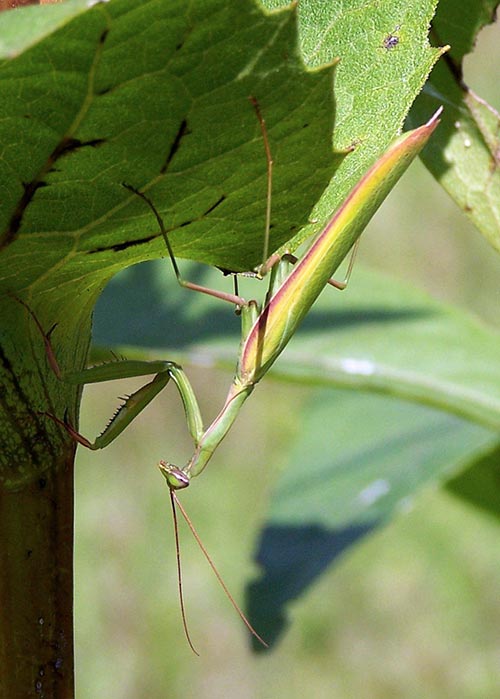 Most contemporary field guides put mantises in their own order, Mantodea, but older insect books group them with the grasshoppers (Orthoptera) (they’re not related to walking sticks, either), and newer books (cutting-edge science, here) will put the Mantises (despite their predatory adaptations) with termites and cockroaches in an order called Dictyoptera. Bugguide.net notes that mantises “can reasonably be described as ‘predatory roaches.’” The Greek word for them, Mantis or Mantes, is variously translated as prophet, soothsayer, and diviner (the Greeks believed mantises have supernatural powers). Their common name causes confusion, but it’s PrAying mantis, because of their reverent posture, not PrEying mantis, for their eating habits.

The BugLady cannot speak to their religious proclivities, but they are superbly adapted as predators. The serrations/spines on the second and third sections of their abnormally long front legs interlock when they grab their prey, making escape impossible. Their eyes are situated so as to afford them binocular vision; like hawks and owls they can see forward with both eyes and can judge the distance to their prey. Like owls, they can rotate their heads significantly (but not like a corkscrew) (neither can owls), the only insects that are able to do so. 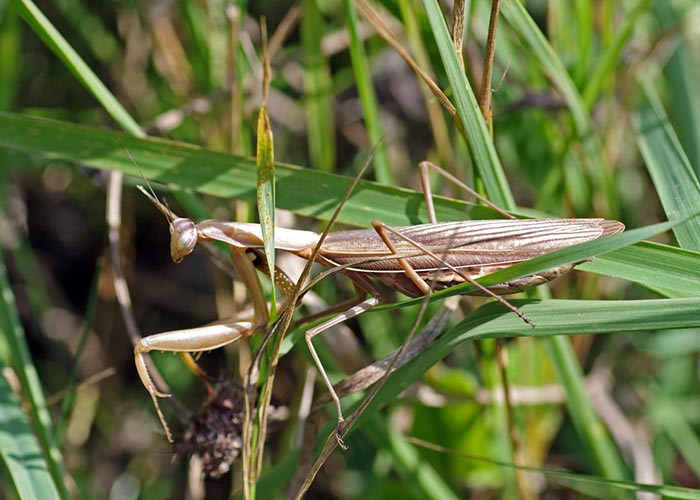 Mantises rely on camouflage and stealth to ambush their prey (there’s a pink Malaysian mantis that blends into tropical orchids, and there are some mantis species that chase their prey like tiger beetles do). The BugLady found a mantis in New Jersey once that was blending into a pickerelweed. She kept looking at the plant, thinking, “Wait—pickerel weed doesn’t have any parts where that plant has parts.”

According to Elizabeth Lawlor in the wonderful Discover Nature around the House, when an insect is beyond a mantis’s considerable reach, the mantis engages in a slow, swaying dance, making eye contact with its proposed meal, edging forward as it sways, until it is suddenly close enough. It targets insects, spiders and other invertebrates, but tropical mantises have been observed holding hummingbirds, small snakes, bats, and baby mice. Fellow mantises are fair game—hatchlings are advised to move away from the egg case hastily.

PMs are visual hunters and therefore daytime feeders, but males may fly at night, tracking female pheromones. A single ear, located on the thorax, helps them detect bats.

Females are famous for eating their mates in the heat of the moment, as we saw on that memorable “Buffy the Vampire Slayer” episode, but this behavior is reported much less often in the wild than it is in caged pairs, where the male can’t escape after mating. After decapitation, the beat goes on, and she gets a protein boost.

She lays as many as 200 eggs in an egg case called an ootheca (today’s vocabulary word) that is at first foamy, and then brittle, and that looks like dried shaving cream, and she dies soon afterward. Check out Lawlor’s book for a description of the development and “birth” of the young mantises. Cutest! Nymphs! Ever! Cuter than Pandas!

Newly hatched mini-mantises (which are so small that they can be dispersed by wind) shed about seven times on their way to maturity in late summer; only about 10% of the eggs in an egg case reach adulthood. 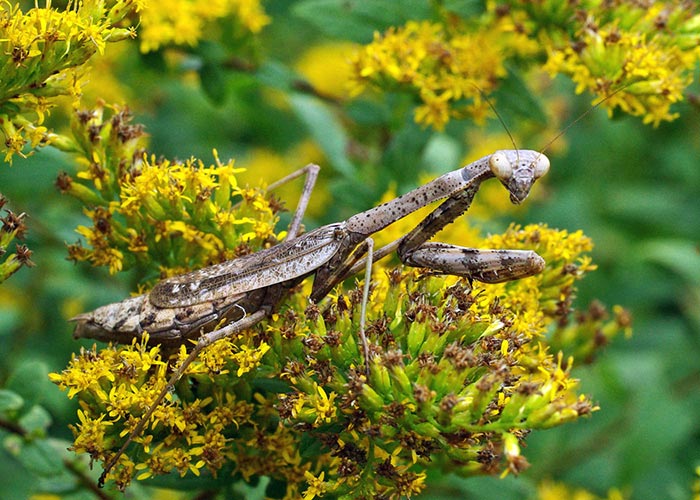 PMs may look you boldly in the eye and track your movements; they may straighten up, fan their wings out, and wave those extraordinary front legs at you; and they might even hiss and try to nip, but they are harmless to humans.

European mantises and Chinese mantises occur in Wisconsin. Both have been for sale in the U.S. since the late 1890’s (though one “outlier” source says that the European mantis came over on the boat in the 1600’s). Both are plus-sized insects, measuring three inches (the European) to almost five inches (the Chinese) in length. There are native mantises in the southern U.S., but conventional wisdom has it that Wisconsin’s winters are too cold for them.

The egg cases of European and Chinese mantises overwinter successfully here, and you can purchase them from garden stores/catalogs whether your climate supports them or not. Long touted as the ultimate in biological control of garden pests, mantises are, alas, equal-opportunity predators, enjoying honeybees and butterflies as much as they do aphids and army worms. Because they are intensely cannibalistic, they are “loners,” so your garden will never be humming with PMs.

The Chinese Mantis (Tenodera sinensis) may be tan or light green, often with a slim stripe along the top edge of the folded wing. Initially introduced to Pennsylvania, possibly by accident in a shipment of nursery plants from Asia, it was soon released in other states. According to bugguide.net, it may have contributed to a decline in populations of native mantises both by eating them and by out-competing them.

The European Mantis (Mantis religiosa) also comes in pale green or tan, but it sports a black or a black-and-white bullseye at the base of each front leg. Its distribution is wider than the Chinese; European mantises can be found across southern Canada but they don’t like the extremes of humidity. They are the State Insect of Connecticut.

People often say to the BugLady “I love my mantis! Can I keep it? If I bring it inside and put it in an aquarium—will it live longer?” (Great! Sure. No.) Bringing them inside won’t prolong their lives by much—they’re programmed to die in fall. Also, mantises have voracious appetites and hunt/eat all day (their development suffers if they don’t), so our “three squares a day” isn’t enough for them. Pet mantises? Yes—they make fascinating—if high maintenance and short-lived—pets, and they may become tame enough to sit on your hand. Be forewarned! If you bring a mantis ootheca into your nice, warm home in late winter or early spring, you’ll (very) soon find a few hundred teeny, ravenous, praying mantises crawling around (didn’t they make a movie about that?). 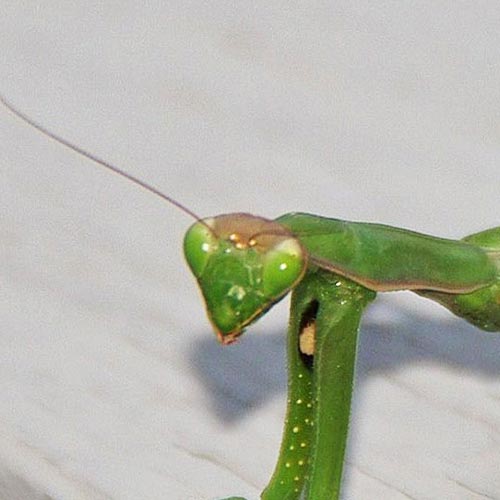